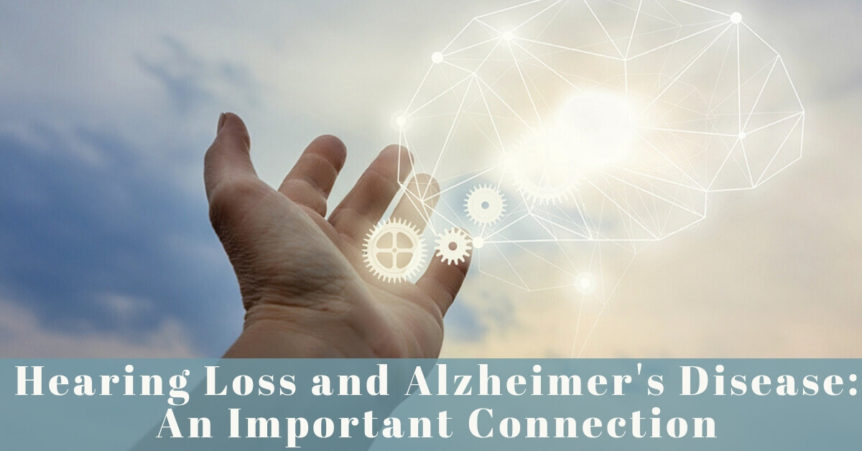 It’s World’s Alzheimer’s Month, which makes it a great time to address the subject of hearing loss.

As more and more research suggests, the two conditions are strongly associated with each other, and treating hearing loss could have a significant effect on healthy brain function.

Hearing loss is the third most common physical condition affecting older adults, after arthritis and heart disease. By the age of 65, 1 out of every 3 people will have some form of hearing loss.

Alzheimer’s disease and other forms of dementia are also on the rise, and there is a projected increase to nearly 14 million Alzheimer’s cases in the U.S. alone by the year 2050.

Multiple studies show that untreated hearing loss is a bigger problem than not being able to understand your coworkers or hear the television–it can seriously increase your risk of developing dementia. Fortunately, hearing aids have been proven to help.

Theories as to why hearing loss contributes to dementia

There are three primary theories that could explain why untreated hearing loss leads to an increased risk of cognitive decline and dementia.

The act of listening, for someone with hearing loss, can be a difficult task. As the brain stays busy trying to decode speech and keep up with conversation, there are less available resources for important things like memory and thinking, and there will also be potentially fewer ‘cognitive reserves’ later in life when they are needed.

2. Parts of the brain are less active

There is another theory that suggests hearing damage could contribute to faster rates of atrophy in the brain’s sound processing center. These are parts of the brain that also help with memory and senses, and decline in these areas has been linked to early stages of cognitive impairment and Alzheimer’s disease.

If you had difficulty hearing in crowded situations and found it embarrassing to communicate, what would you do? Studies show that many people withdraw from social settings, and this decreased social engagement is also a well-noted risk factor for cognitive decline.

Though researchers may not have a definite answer as to how hearing loss accelerates cognitive decline, there are studies that prove treating hearing loss with hearing aids can help to reduce the risk of this common disease. A comprehensive French study revealed that hearing aids can actually lower the risk of cognitive decline in a substantial way.  In fact, researchers found that those with hearing loss who wore hearing aids had about the same chance of developing dementia as those with normal hearing. The study, led by Isabelle Mosnier of Assistance Publique-Hopitaux in Paris, examined 94 people between the ages of 65 and 85 with profound deafness in at least one ear. Each participant with hearing loss was given a cochlear implant and also received twice-weekly auditory therapy. Over 80 percent of those who had the lowest cognitive scores showed significant improvement one year after receiving the implant.

How hearing aids can help

While people with completely normal hearing can also develop hearing loss, the theory is that degenerated hearing, by making the brain work harder to understand speech, accelerates and worsens cognitive decline, increasing the risk for Alzheimer’s and other forms of dementia. Fortunately, this risk can be avoided if age-related hearing loss is diagnosed and treated with hearing aids.

Assistive hearing devices help by easing the burden on the brain during the listening process. Hearing aids amplify sound, which is crucial, but they also help by filtering out the background noise that would normally interfere with your hearing and cause stress. Simply put, the brain will not need to work as hard to understand sound signals while a hearing device is worn. And advances in hearing technology mean that these tiny devices are now better at helping wearers to tell where sound is coming and to distinguish speech from other noises in the soundscape.

Being able to hear without difficulty can also boost memory, make it easier to stay active socially, and reduce depression–all of which can help to keep our brains healthy.

Get your hearing tested today

Thanks to advances in hearing aid technology, finding the best, personalized treatment for your hearing loss is easier than it ever has been. At Custom Hearing Solutions we help you take the first step by offering free, comprehensive hearing exams in our Lincoln and Omaha offices.  Our expert team will then work with you to find the hearing aids that are best suited to your hearing needs and lifestyle. Let us help you live the life you want to live–and protect your cognitive health–by treating your hearing loss today.