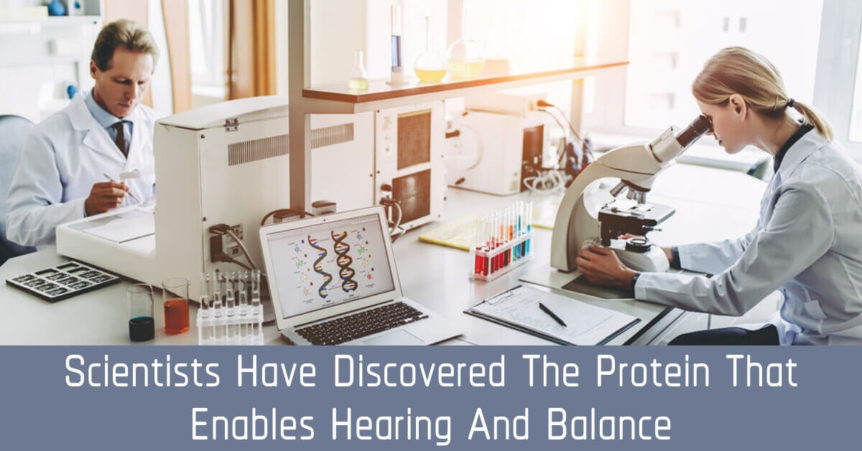 It took 40 years, but scientists at Harvard Medical School (led by Jeffrey Holt, PHD) have finally worked out in detail how hearing is so important to our balance. They have discovered that a protein called TMC1 transmits sound and head motion into electronic signals, which are then used by the brain to maintain hearing and balance.

This discovery follows previous work which showed that TMC1 mutations cause deafness, as well as the first discovery of the connection between hearing and balance (from a team also led by Holt) in 2011. His previous work looked at the influence of proteins that allow ions like calcium and potassium to enter the inner ear cells. This then helps the cells convert sound and movements of the head to communicate with the brain. But back then, little was known about what proteins in particular were helping the ions enter the cells. His latest findings offer that missing link.

Understandably proud of his teams’ latest findings, Holt announced that the work yields ” definitive proof that TMC1 is the critical molecular sensor that converts sound and motion into electrical signals the brain can understand.”

“It is, indeed, the gatekeeper of hearing,” he says.

To come to their conclusions, the researchers first created a model of the protein TMC1. Within this, they found 17 amino acids that were likely to have an influence on how the protein works. They put these acids, one by one, into the TMC protein of mice and monitored the effect on the movement of charged ions through the pore when responding to sound.

They found 11 that changed the flow of ions. 5 had a significant effect, reducing the ions by 80%. But one particular amino acid blocked all the calcium ions. This means that no nerve signals were able to make it to the brain.

This work was a long time coming. One of the reasons why it took so long was that the cochlea itself is very difficult to access. Also, there are only 16,000 hair cells in the ear, which makes it difficult to analyse them.

The discovery was music to the ears of those researchers who have long argued that hearing loss had an adverse effect on balance. A recent study by the Washington University School of Medicine found the hearing was important in maintaining stability. They tested people who were hard of hearing on their balance – once with their hearing aids and once without. The participants performed more poorly when not wearing their devices.

Another study by the National Institute on Aging found that people with mild hearing loss had a likelihood of falling three times greater than people without hearing loss. For every 10dB that people lose, their risk of falling rises by 1.4 percent. At the time, researchers’ explanations for this imbalance were that balance was ‘cognitively demanding’. Little did they know that the answer lay in a tiny protein.

Although hearing loss by itself does not cause balance problems, it can work together with a pre-existing lack of balance to contribute to falls. The ear doesn’t just process sound, it also contains something called the vestibular system which works with other systems in the body to maintain balance.

Could help be on the way in the near future to help people with hearing loss hear perfectly again?  The discovery will help researchers focus on TMC1 and its effect on the sound-to-signal conversion process, which could mean treatment for some forms of hearing loss, a condition previously seen as irreversible.

That would change the lives of 460 million people around the world. But it would have an even greater effect on the 24,000 children born with hearing loss each year in the US. The development of language strongly linked to your hearing. Being able to cure hearing loss in children from an early age could mean that they grow up to learning to speak. That could change the lives of thousands of babies born in the US every year for the better.

Indeed, there are a lot of exciting developments on the horizon. But if you’re concerned about your hearing abilities today, contact us at Custom Hearing Solutions to schedule a hearing exam and consultation!